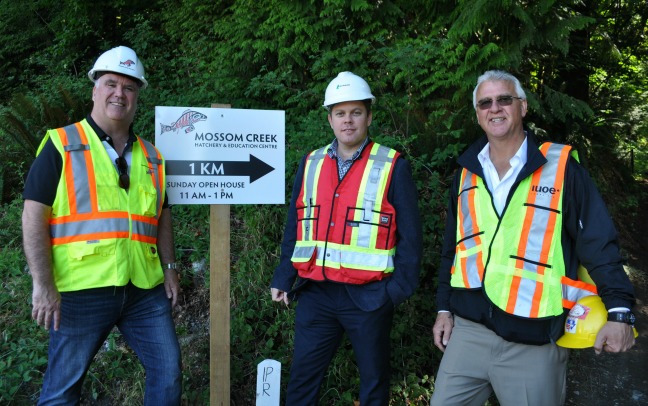 Volunteering or visiting Port Moody’s Mossom Creek hatchery no longer requires a bumpy ride up a gravel maintenance road after a union, a concrete company and the city teamed up.

Now, the 1-km route is more like a regular road, with a compact, rut-free surface and slanted to one side to promote drainage.

“We’re really happy with this, it will really make a difference for the people who come to visit,” Kevin Ryan, president of the Burrard Inlet Marine Enhancement Society, told The Tri-City News during a site visit.

Pat Dennett, who helped coordinate the project, which is valued at $100,000, said everything came together perfectly last week to ensure the work got done in a timely manner.

The the roadwork was undertaken donations of labour, material and equipment from the International Union of Operating Engineers Local 115 and Lafarge Canada and the support of the city of PoMo.

A roller smooths packs down the 1-km gravel road to the Mossom Creek Hatchery. Recently, the roadwork was undertaken with the support of the city of Port Moody and donations from the International Union of Operating Engineers Local 115 and Lafarge Canada. – Photo by Burrard Inlet Marine Enhancement Society

It took six months to bring all the players together during a window when the hatchery is less busy, according to Ruth Foster, one of the hatchery’s founders, and now visitors can get up to the hatchery without worrying about losing a muffler.

Foster explained that in heavy rain, water would cascade down the road, creating ruts that became deeper with use.

Thanks to the trucking in of more than 2,000 tonnes of material, donated by Lafarge, and grading and compacting by Local 115 apprentices, the road is now smooth and ready for visits.

“The project has proceeded with no issues and the end result is an amazing new road to our hatchery,” Ryan said after the work was done.

Shannon Ladewig of Lafarge Canada said the company’s donation is the continuation of a partnership that started when Mossom was rebuilt after a fire and aligns with the company’s goals of education, environment and sustainability.

Jeff Gorham and Brian Cochrane of Local 115 said the project was an opportunity to demonstrate commitment to protecting the environment and helping the longstanding hatchery while also giving an education opportunity to young workers.

The city of PoMo, meanwhile, assisted with permits and will pave a short stretch between the gravel road and a laneway leading to Ioco Road. 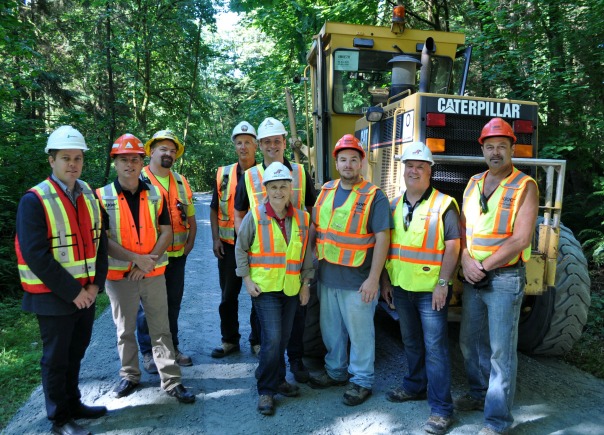