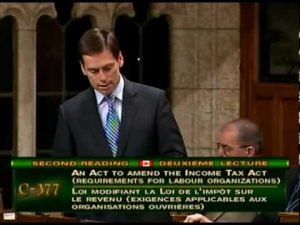 The recent post written by the President of Merit Canada, Terrance Oakey, is just more rhetoric coming from the biggest proponent of Private Members Bill C-377. Throughout the procedural process of the Bill, Merit Canada, an anti-union contractor-based organization, has been lobbying the Conservative government quite regularly, including 12 meetings with MP Russ Hiebert, five meetings with Finance Canada, and another 12 meetings with the Prime Minister’s Office, a record that those opposed to the Bill have been unable to match. A quick search of Communication Reports on the website of the Office of the Commissioner of Lobbying, confirms just how often Merit President Terrance Oakey met with the above groups and people. It seems very hypocritical of Mr. Oakey to question union members for lobbying the government, while he has been making a living doing the exact same thing.

While we are on the subject of transparency, it is interesting to point out that while the President of Merit Canada is representing an organization involved in the construction industry, his background is far from that industry all together. He has served as a Conservative Party staffer for several years, and worked in various positions as a Lobbyist on Parliament Hill. Could it be that it was in part because of this experience that Bill C-377 came to be — and not out of a desire to help middle-class working men and women of Canada?

There are some other key points that should also be brought to light for Canadians.

Merit Canada is an anti-union group consisting of about 3,500 small and mid-size contractors who employ about 60,000 workers in eight provinces in Canada. Unionized work forces are their direct competition. So don’t they stand to benefit from the government forcing unionized work forces to open their books for everyone to scrutinize under the guise of transparency? More specifically, Merit’s competition is the Canadian Building Trades, who have approximately 450,000 members employed by various contractors across Canada. Under this new law Merit contractors will be able to specifically see the financial details and inner workings of their unionized competition. The competitive advantaged gained by Merit Canada is like a game of poker in which the unions are forced to play with their cards dealt face up.

The wild claim by the President of Merit Canada that “These funds are funneled into a wide range of causes” is very misleading. Union members decide how their dues are spent democratically at regular union meetings by a vote for or against the motion.

Suggesting other jurisdictions in the world have a form of similar legislation is not entirely accurate. The writer failed to mention that those jurisdictions also have reporting obligations for employers and employer organizations, such as Merit. Bill C-377 does not include those same reporting obligations, so that counter-balance is conveniently missing in the Canadian legislation. Only unions and union members will be affected. Liberal MP Rodger Cuzner, Cape Breton-Canso, put forth an amendment that would require all not-for-profit organizations and contractor organizations, like Merit Canada, to file the same documents and have them posted publicly on the Internet; however that amendment was handily defeated by Conservative Party MPs.

Canadians should be made aware that Bill C-377 is a competition issue, not a national public policy issue. Canadian tax payers will be footing the bill for the design, start-up, maintenance, and monitoring costs that the CRA will incur for this reporting. The Canadian Labour Congress has estimated that setting up this system will cost Canadian taxpayers between $32-million & $45-million dollars per year. And for whose benefit?