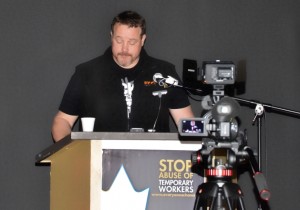 The Tim Horton’s branch in Elk Valley is under investigation after allegations of temporary foreign worker abuse surfaced in early December 2013.

According to employees and witnesses, staff were forced to work long hours with little compensation, and even hand over part of their paychecks to the owner; more information can be found here.

On December 15th, IUOE Local 115 Member Representative Brian LeFebvre joined supporters for temporary workers’ rights in addressing a crowd at a rally held in Fernie to speak out against the abuses and the ongoing failure of Canada’s TFW program.

The rally forms part of a larger movement called “Give Everyone a Chance for Canada’s future” which exposes and discusses how minority groups and foreigners are often subjected to exploitation while trying to make a living in Canada.

The Elk Valley Tim Horton’s case is currently under investigation by the RCMP and we will share the outcome as soon as a verdict is reached.