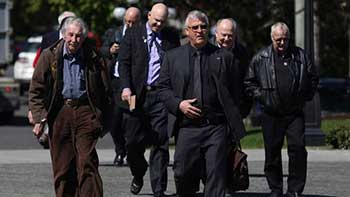 Brother Brian Cochrane and retired dam builders in Victoria for meetings with Senior Government Ministers. (Photo: CHAD HIPOLITO For THE GLOBE AND MAIL)

On Thursday, April 16th, 2015 IUOE 115 Business Manager Brian Cochrane and allies from the B.C. Building Trades travelled to Victoria to meet with Senior Government Ministers, in the hopes of convincing the Government and B.C. Hydro to sign a comprehensive labour agreement for the upcoming Site C dam. IUOE 115 and the B.C.

Building and Construction Trades are concerned that without a project labour agreement (PLA) of some kind, the Site C project is at risk of labour disruptions and shortages of skilled tradespeople, and wanted to deliver that message directly to Cabinet.

Brother Cochrane and B.C. Building and Construction Trades President Tom Sigurdson were joined by long-time IUOE 115 member and past President, Brother Jack Whittaker. Brother Whittaker, 78, was a unionized worker on the first large-scale dam project in B.C., the construction of the W.A.C. Bennett Dam in 1964. He now owns and manages a unionized construction company, and brings a wealth of experience to the conversation.

Brother Whittaker called the government’s plan for an open-managed site “foolish”, adding, “I’m here as a concerned citizen of B.C. because they are going to escalate that job. They are going to extend the time frame. They are saying 10 years. They’ll be lucky to do it in 15 years if they do it open shop because it will be chaos.”

“We’re not giving up and we’re not going away,” said Brother Cochrane after the meeting. “This project is too large and too important to be experimenting with untested labour supply models. That’s just too much risk for a critical piece of infrastructure like a dam.”

The Victoria visit was widely covered in the local and national media, and is part of the Building Trades’ larger campaign to ensure a comprehensive PLA forms the basis for the Site C project.