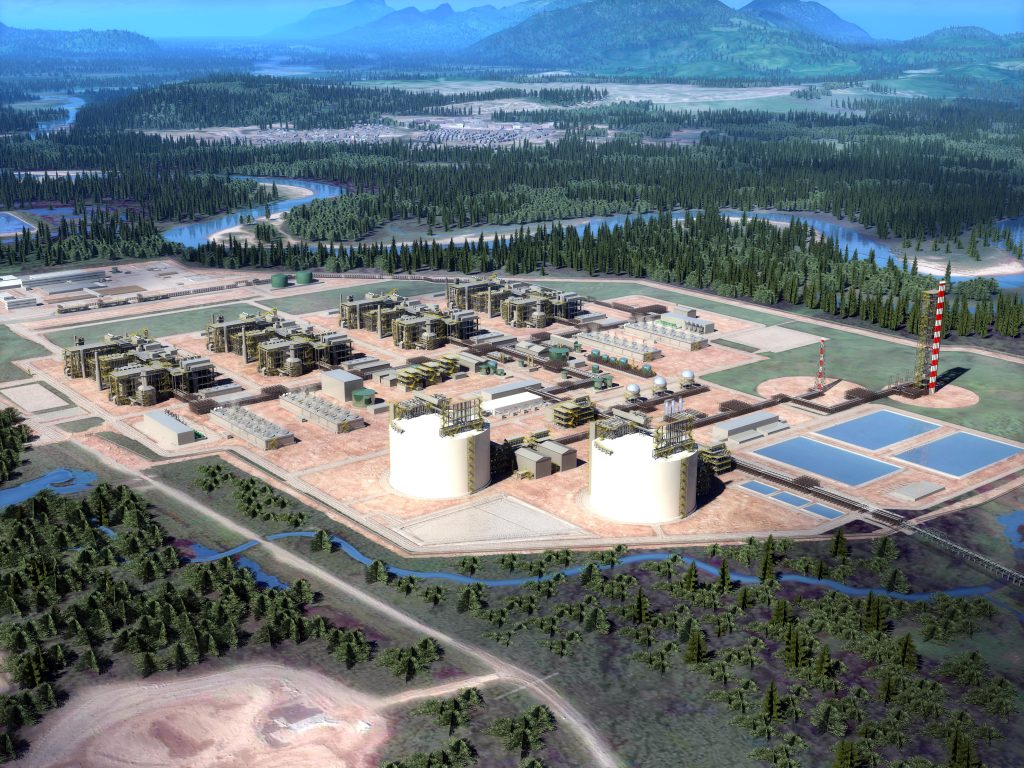 A rendering of the Kitimat LNG Canada terminal at completion. Source: LNG Canada

The BC LNG Alliance, First Nations LNG Alliance, and mayors across northern B.C., along with the BC Chamber of Commerce, BC Business Council, BC Building Trades, Build TogetHER and BC Centre for Women in Trades said the measures provide confidence that an LNG industry in B.C. will provide much-needed benefits for our province and Canada.

The measures tabled today provide the LNG industry with a level playing field with other established industries in B.C. These include no industry-specific tax and a hydro rate that is the same industrial rate other industries pay. It is important for B.C.’s LNG projects to not face additional costs other LNG projects in development around the world do not pay.

LNG from B.C. will set a global example by producing LNG with the lowest CO2 emissions per tonne of LNG compared to LNG export facilities anywhere in the world. B.C.’s responsibly- produced LNG has a critical role to play to help provide millions of people with less-polluted air and provide countries moving away from more carbon intensive forms of electricity generation with the lowest-emissions intensity LNG in the world, supplied by British Columbia.

Quotes:
“The First Nations LNG Alliance is committed to responsible resource development, and we support the highest environmental standards. LNG from BC will lower global greenhouse gas emissions, primarily in China. That benefits B.C. as well as the world, because greenhouse gases do not respect borders. The BC industry is doing its due diligence regarding the environment, and this aligns with our values and beliefs as Indigenous peoples of Canada.
–Karen Ogen-Toews, CEO, First Nations LNG Alliance (Board members include: Haisla Nation, Ts’il Kaz Koh First Nation (Burns Lake Band), Wet’sewet’en Nation, Skin Tyee Nation, Gitxaala Nation, Huu-ay-aht First Nation)

“Women represent less than five per cent of the skilled construction trades, and it’s been that way for decades. With the LNG industry and recent commitments from government and industry to women in trades, we are excited about the prospect of increased opportunities for women in this sector.”
–Chelsea French, IUOE Local 115 member and Co-chair, Build TogetHER BC

“The BC Building Trades has been working with the LNG industry for years to ensure our province has the skilled workers the industry requires. We’ve doubled down on our apprenticeship training programs across the province so that B.C. workers – including underrepresented groups like Indigenous workers and women in trades – have access to jobs, the industry flourishes, and B.C. prospers.”
–Tom Sigurdson, Executive Director, BC Building Trades