BURNABY – IUOE Local 115’s General Membership Meeting on March 19th included a special guest: Leader of the opposition, BC NDP MLA John Horgan.  Horgan spoke to IUOE 115 members about the importance of supporting unions, building BC and the lack of guarantees for BC jobs from the BC Liberal Government.

“[Premier Christy Clark] talks about jobs, she talked about 100,000 jobs when it came to liquefied natural gas.  And yet, when we went into the legislature to codify, to put in place a development agreement… there were no guarantees for BC jobs.  There were no guarantees for BC procurement,” said Horgan, adding he believes BC has an opportunity to take our collective wealth and make sure we benefit from it.  His statements echo the campaign lead by IUOE Local 115 and Business Manager Brian Cochrane to have BC workers employed first on multi-billion dollar publicly funded projects, like the Site C dam.

“You’d think that a government would want to make sure that British Columbia would maximize benefits for a project of this magnitude, especially when we had a historic model for dam construction going back over 50 years under W.A.C. Bennett,” said Cochrane.

During his time working under former BC Premier Mike Harcourt, Horgan worked on similar models for dam building with the Columbia Basin Trust that employed union members.  That agreement lead to three dams being built in the Kootenays under allied hydro agreements.  In his speech, Horgan vowed under an NDP government, he would build BC with British Columbians and union labour first:  “Christy Clark is out spending your money and she’s not doing anything to make sure that you get the work.  That’s not how BC has been built.  She likes to pretend that she’s W.A.C. Bennett.  W.A.C. Bennett built the Two River Policy, he built our hydroelectric system with union labour… there are a whole bunch of people ready, willing and able to work;  Union members, Building Trade members that are sitting at home while other people less qualified and from other jurisdictions are getting that work,” Horgan stated to the large crowd attending the GMM.

Horgan’s statements were met with cheers from the packed auditorium. 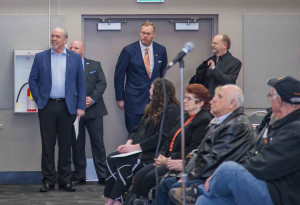